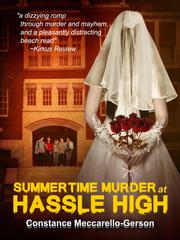 Sixtysomething Maria wasn’t supposed to work this summer. She and her husband, Al Cohen, have some work to do on their marriage, so they planned a river cruise in France for the end of August. Then a call comes from Dr. Kane, the school superintendent: Summer school principal Deb Jones has gone missing, and he needs Maria to fill in. As it turns out, Deb’s fiance, social studies teacher and coed softball team coach Frank Major, has also disappeared. The following morning, as Maria drinks some coffee prepared by her capable secretary/assistant Nan Summers, Joe walks into the office, as handsome as ever; in fact, he’s the reason that Maria’s marriage is floundering. Then Meccarello-Gerson’s (Murder at Hassle High, 2018) second series mystery really shifts into gear. Within a few pages, Frank’s body is found at John F. Kennedy International Airport, in the trunk of his pricey, bright red BMW M760i. Naturally, ex-cop and incorrigible sleuth Maria immediately joins the investigation, much to her husband’s displeasure. As the body count mounts and the list of possible suspects lengthens, she seeks help from the delightfully unmanageable “Nut Squad”—a group of aging, teenage class-repeaters who are totally devoted to her. Meccarello-Gerson’s principal protagonist is a fine narrator, who leads readers through a dangerous maze of jealous ex-lovers, blackmail, illegal gambling, and secret liaisons with edgy sarcasm and self-deprecating humor. The complicated plot threatens to become unwieldy at times, as assorted bad guys provide misdirection that keeps Maria and Joe off-balance. Happily, the romantic tension between those two lightens things up. One thing is certain: Hassle High will be a lot less interesting if the Nut Squad ever makes it to graduation. The book’s only sour notes are its numerous copy editing oversights (“ten thorty,” etc.).

A dizzying romp through murder and mayhem, and a pleasantly distracting beach read.