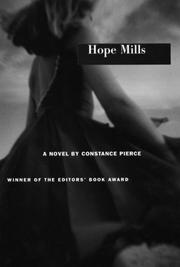 A first novel by storywriter Pierce (When Things Get Back to Normal, 1987) travels the same Carolinian terrain as the much more elegant work of Kaye Gibbons; thematically, it bears a lot in common with Robert Clark's novel, In the Deep Midwinter (1996), which also culminates in an illegal abortion during the Eisenhower years. By comparison, though, Pierce's relentlessly drab fiction drags. Until the startlingly upbeat conclusion, the author paints a rather depressing portrait of Hope Mills, N.C., as a class- stratified, oppressive mill town, with little room for social mobility, an innate prejudice toward blacks and foreigners, and a patriarchal attitude concerning women. The double standard figures prominently in the story, with horny men constantly on the prowl, and girls doomed to succumb to their blandishments. Tollie Ramsey, 15 and confused, hopes to escape the dead-end of ``mill rat'' life, but everything seems stacked against her. She discovers her illegitimacy; she gets knocked up by a Puerto Rican soldier from the local base; her stepfather becomes an alcoholic; and her mother is apparently determined to kill herself. Janice Ramsey, herself a woman who once dreamed of better things, not only settled for the first man who would be a daddy to her little girl, but she escaped Milltown only to return after her infant son died of crib death. Tollie's simple dreams of ``home-cooked food [and] an easy home life'' contrast with those of her best friend, Lily Jones, a sassy girl who hopes that by sleeping with a local d.j. she might eventually conquer Hollywood. Tollie finally seeks out the local voodoo-abortionist, an exceedingly wise black man who serves as her advisor and confessor. Perhaps, Tollie muses, life was just about ``plain old sin and redemption.'' Though Pierce isn't quite sure. It's hard not to think of Gibbons's suggestive, economic style and her subtle feminism when slogging through Pierce's relatively artless complaints against small-town life in another era.