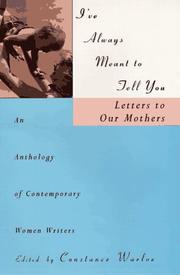 I'VE ALWAYS MEANT TO TELL YOU

Letters to Our Mothers, An Anthology of Contemporary Women Writers

With wrenching precision, 79 women recall their mothers in original letters, essays, poems, and stories, evoking basic truths about the inescapability of mother-daughter similarities, the lifelong rapture of mother for child, and the daughter's unquenchable longing for mother after her death. Contributors range from established literary figures (Joyce Carol Oates, Rosellen Brown) to less well known writers and artists. Some of these pieces reveal anger at a mother's abandonment or at failure to protect a child from violence. All of them seek to relive the past, especially those moments when (as Lynne Sharon Schwartz says of her mother's singing) ``life becomes more than itself, so intense and fulfilled that we wish it could be that way always.'' Most also express need—``how much I need to reach out and touch your hand,'' Carol Shields says of her long-deceased mother—and the realization that querying the source of one's predilections is often unnecessary. As Ellen Gilchrist tells her mother: ``Every morning you think the world is beginning all over and all will be well with the world. I think so too. Where do you think I got an idea like that?'' Edited by novelist Warloe (The Legend of Olivia Cosmos Montevideo, 1994), the pieces are well-chosen, with every type of revelation expressed. But the mass of memories raises the question: How many truths can one take in a book? Maybe not as many as are presented here. The problem is that the letters are addictive: Like listening to a top-40 station, you hang on to hear what's next. What will Rita Dove say? Andrea Barrett? Barbara Kingsolver? Whether exhausted or delighted by the book, be warned: Memories of one's own mother may arise and wilt the page with tears. Best to punctuate the readings with a viewing of Albert Brooks's Mother. (b&w photos, not seen)