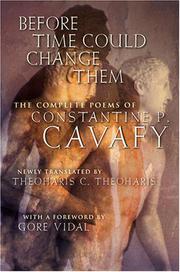 BEFORE TIME COULD CHANGE THEM

Cavafy (1863–1933) remains one of the foremost modern Greek poets. Born in Alexandria to a mercantile family whose fortunes had begun to wane, he supported himself as a clerk and wrote poetry in his spare time—not publishing his first collection until he was 41. He wrote about 70 poems a year, destroyed most of them, and printed the remainder on broadsheets that he circulated among his friends and family. Theoharis (Comp. Lit./Harvard Univ.) has arranged the volume according to Cavafy’s own suggestions for a thematic (rather than chronological) ordering. The poet’s predominantly iambic meter translates well into English, although his rhyming and assonance do not. Theoharis has kept the same number of lines that occurred in the original Greek, but he does not maintain every line or stanza break. He has uncovered a dozen poems not included in the previous “complete” version of Cavafy’s work, first published in 1961 with an introduction by W.H. Auden. Cavafy was then regarded as anachronistic (for the spiritual dimension of his verse) and immoral (for his open tributes to homosexual love), yet he retained a following of champions, including Jacqueline Kennedy Onassis and Gore Vidal (who contributes the foreword). His most compelling work includes dramatic soliloquies of historical figures and the sensual depictions of male-male romance, both emphasizing the possibility of “comporting [oneself] in the world beautifully and justly.”

A welcome collection by a modern master who deserves far greater renown.