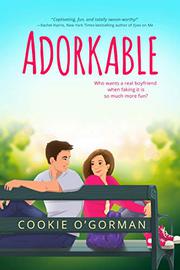 In O’Gorman’s YA debut, two best friends try to fool people into thinking that they’re in love—and then discover a new facet of their relationship.

Sally Spitz is a frizzy-haired 17-year-old girl with a charming zeal for three things: Harry Potter (she’s a Gryffindor), Star Wars, and getting into Duke University. During her senior year of high school, she goes on a slew of miserable dates, set up by her mother and her own second-best–friend–turned-matchmaker, Lillian Hooker. Sally refuses to admit to anyone that she’s actually head over Converses in love with her longtime best friend, a boy named Baldwin Eugene Charles Kent, aka “Becks.” After a particularly awkward date, Sally devises a plan to end Lillian’s matchmaking attempts; specifically, she plans to hire someone to act as her fake boyfriend, or “F.B.F.” But before Sally can put her plan into action, a rumor circulates that Sally and Becks are already dating. Becks agrees to act as Sally’s F.B.F. in exchange for a box of Goobers and Sally’s doing his calculus homework for a month. Later, as they hold hands in the hall and “practice” make-out sessions in Becks’ bedroom, their friendship heads into unfamiliar territory. Over the course of this novel, O’Gorman presents an inviting and enjoyable account of lifelong friendship transforming into young love. Though the author’s reliance on familiar tropes may be comforting to a casual reader, it may frustrate those who may be looking for a more substantial and less predictable plot. A number of ancillary characters lack very much complexity, and the story, overall, would have benefited from an added twist or two. Even so, however, this remains a largely engaging and often endearing debut.

A familiar but heartfelt romance for easygoing readers.