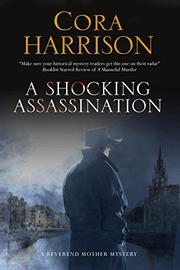 The burning and looting may have subsided, but Ireland’s struggle for independence has left the city of Cork still very much on edge in the 1920s.

Reverend Mother Aquinas is shopping at the English Market for eggs for her ailing gardener when she witnesses the shooting of city engineer James Doyle. The killer appears to be Sam O’Mahony, a young reporter whose mother, a stallholder in the market, struggled to educate him for a life better than hers. Sam claims that someone dropped the murder weapon on his foot, startling him enough to pick it up in the darkness when the lights went off. Although Sam’s arrested, the Reverend Mother is inclined to believe in his innocence, since she saw his face after the murder and also spotted a trench-coated man, a hat hiding his face, who vanished before the police arrived. Luckily, the detective in charge is one of her former students, Inspector Patrick Cashman. Despite the evidence against Sam, Cashman has a certain amount of faith in the clever Reverend Mother and is willing to look for other suspects. Doyle had the reputation of being open to bribes during the city’s rebuilding, favoring those with money and political influence over the small businessmen and poor folk who lost their homes and livelihoods. As the Republicans continue to harass the remaining English forces, another of the Reverend Mother’s students, a young woman in love with Sam, plans to break him out of jail. Meanwhile, the Reverend Mother, who has highly placed connections in Cork, is using them to search for others who might have motives to kill Doyle. Her suspects cover a wide range of the social and political scale, and getting too close to the truth puts her own life in danger.

The second in Harrison’s historical series (A Shameful Murder, 2015) paints a fascinating picture of life in Ireland as it makes the painful transition to a republic. A vexing mystery and a clever sleuth cap it off.