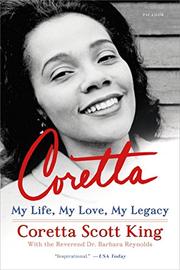 MY LIFE, MY LOVE, MY LEGACY

In an afterward, Reynolds, a journalist and friend to Coretta Scott King (1927-2006) and a former USA Today editorial board member, offers the “making of her memoir,” which required many recorded interviews since her first article about King for the Chicago Tribune in 1975, with their formal contract signed in 1997. Overall, the tone is as gracious, elegant, and soft-spoken as the legendary Southern lady and concert singer, who was born in the deeply segregated town of Heiberger, Alabama, where her black family was regularly terrorized by whites, including the burning of her house when she was 15 years old. Resilient and fearless due to the example of her harassed father, King was inculcated in the Mount Tabor AME Zion church, where her grandfathers were leaders. Attending the Lincoln missionary school, she found her “escape route” from the South in multicultural Antioch College (Ohio), then followed her passion for classical music to the New England Conservatory, in Boston, where she met the “too short” and unprepossessing minister from Atlanta, MLK Jr. Coretta wanted to be a concert singer and live comfortably in the North, while Martin wanted her to be his wife and have children and move to Montgomery to fight desegregation with nonviolence. Eventually, she came around to embrace his ideals. While her memoir is very much her own journey, it is also about her collaboration with her husband, and she insists they both had a calling by God: “God appeared to have appointed Martin and me…to become the messengers.” The author does not countenance rumors that her husband was unfaithful, insisting that the FBI planted evidence as a smear campaign. In the end, her four children and her “fifth child,” the Martin Luther King Jr. Center for Nonviolent Social Change, in Atlanta, remain her greatest legacies.

A touching memoir from an important figure in the civil rights movement.