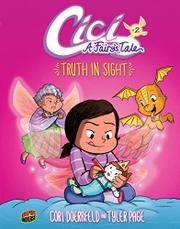 From the Cici: A Fairy's Tale series, volume 2

A fledgling Latina fairy learns she must use her magic responsibly.

Quintessential preteen Cici is trying to make sense of a turbulent time in her life: her dad has moved out, she's lost her best friend to the popular clique, and she's learning to control her nascent fairy powers. She has the "fairy sight," which means she sees people with a sort of enhanced vision that helps her understand them (for example, she sees her harried mother as a multitasking octopus). One day at school she finds popular white classmate Kendra's beloved princess doll (fairy sight reveals Kendra to be something of a princess as well). Cici, seizing the opportunity to use her powers, chooses to wield them in an unkind way. When Abuela, also a fairy, finds out what she has done, Cici must own up to her wrongdoings. The plot—a friendship-tinged riff on the "with great power comes great responsibility" theme—is instantly familiar, even with the fantasy elements. Doused liberally with a comely array of warm pinks and purples, the panels have a keen focus on facial elements and hold a high visual appeal. Though this series outing doesn’t explore its issues with much real depth, the pleasing style and familiar subject matter help to compensate, leaving this with a very episodic, sitcomlike feel.