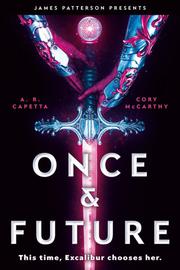 From the "Once & Future" series, volume 1
by Cori McCarthy & Amy Rose Capetta

A girl with a sword and an impulse problem embarks on a perilous quest to save her family and free the galaxy from the clutches of a power-hungry corporation.

When Ari, an on-the-run refugee from planet Ketch, pulls Excalibur from a tree on Old Earth, she sets a centuries-old cycle into motion. By claiming the sword, she unknowingly attracts the enchantress Morgana and awakens the backward-aging magician Merlin, both of whom are doomed to an eternity of reliving the same story of King Arthur’s rise and fall. Honest to the core and averse to pageantry, Ari rejects her destiny as “the one true king” until she discovers her connection to the Arthur cycle may help her raise a resistance against the Mercer Company, who imprisoned her mothers and are threatening everyone Ari loves. In this intergalactic reimagining of Arthurian legend, a racially diverse queer and trans ensemble of characters leads the battle against the tyranny of capitalism. Capetta (The Brilliant Death, 2018, etc.) and McCarthy (Now a Major Motion Picture, 2018, etc.) develop complex conflicts on multiple fronts, including a passionate, whirlwind romance between Ari and her Gweneviere. The women in the story grow together through their challenges with one another and learn from their differences.

All hail this worthier-than-ever, fresh, and affirming reincarnation of the legendary king and her round table of knights which dazzles with heroic flair, humor, and suspense. (Science Fiction/Fantasy. 14-adult)


BEST YA FANTASY AND SCIENCE FICTION OF 2019:

WE RULE THE NIGHT
by Claire Eliza Bartlett
Adult

A CURSE SO DARK AND LONELY
by Brigid Kemmerer
Adult

A HOUSE OF RAGE AND SORROW
by Sangu Mandanna
Adult

ONCE & FUTURE
by Cori McCarthy
Adult

WE SET THE DARK ON FIRE
by Tehlor Kay Mejia
Adult

SWORD IN THE STARS
by Cori McCarthy
Adult

SWORD IN THE STARS
by Cori McCarthy
Adult

THE STORM OF LIFE
by Amy Rose Capetta
Adult

GIRLS MADE OF SNOW AND GLASS
by Melissa Bashardoust
Children