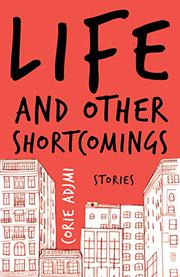 LIFE AND OTHER SHORTCOMINGS

Characters recur in these tales, but each stands on its own. They take place in a range of eras from the 1970s to the present and take readers to various cities in the United States and Spain. All are succinct, slice-of-life stories, and at least half feature characters from the three couples introduced in the opening story, “Dinner Conversation,” which is set in New York City in 1998. The six diners are close friends who call themselves “The Sixers,” but despite their long history, they each have insecurities that will ultimately destroy their relationships. All the women in these stories navigate treacherous journeys through landscapes rife with misogyny and physical and psychological abuse. Many of the women have internalized their fears of growing older, as expressed by Kelly, the narrator of “The Drowning Girl”: “I WAS ONCE YOUNG AND PRETTY. THIS, WHO YOU SEE NOW, IS NOT ME.” Adjmi conjures convincing portraits of a variety of female characters with economical language and biting dialogue. Their relationships with men are not enviable, as most of the male characters are angry, belittling, and erratic. With piercing clarity, the author often offers an unexpected payoff in the final sentence. In “The Devil Makes Three,” for instance, Iris, an Orthodox Jew, prepares for a mikvah, a monthly ritual bath for women, before resuming marital relations. The engaging description of this arcane process is coupled with an account of Iris’ chaste online dalliance with a non-Jewish man. Readers can admire her adherence to the faith, see how restricted her life is, and end up with a sense of the sensual joy that she shares with her husband. However, not every story lands as well; some are a tad too cryptic. In the fablelike “Happily Ever After,” man loves car, woman loves man, woman destroys car, and man’s personality disintegrates. Adjmi’s take on reality is more satisfying.

A compelling collection that captures the mystery and menace beneath love and family life.