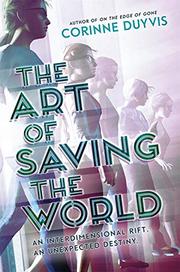 THE ART OF SAVING THE WORLD

Hazel Stanczak is tasked with saving the world, but she’s not alone.

Hazel has always been stuck in place, unable to leave home due to a strange link to an interdimensional rift. Then, on her 16th birthday, the rift spits out copies of her. The Powers That Be have chosen her to save the world from an unknown threat. Accompanied by her doppelgängers and the almost-clichéd sarcastic dragon Neven, Hazel struggles with a deck that’s been stacked against her. All the while she is faced with the question of her own identity and worth in the face of so many duplicate versions of herself. Queer issues, mental health, and race are all discussed through Hazel’s lens of an anxious, questioning, White teen. Multiple characters of color show up, both in important roles, such as Hazel’s biracial half sister, Carolyn, and Chinese adoptive father, and as background characters, like some of Hazel’s classmates. The representation of mental health issues is at times so painfully accurate that the novel becomes difficult to read but at the same time, impossible to put down. Refreshingly, Duyvis finds time to discuss painful periods and what an endometriosis diagnosis means for a teenager. A midnovel twist takes the standard chosen-one plot formula and tips it on its head, then wrings what’s left for all the angst and existential crises it’s worth.

A compelling narrative based around the subversion of generic fantasy and science fiction fodder.