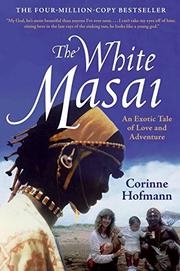 An Exotic Tale of Love and Adventure

Two wildly different cultures collide in this internationally bestselling story of a successful Swiss businesswoman who falls for a Masai warrior.

Hofmann begins with details of a vacation trip to Kenya with her then-boyfriend. Three days after they arrived, she spotted Lketinga: “A tall, dark brown beautiful man . . . more beautiful than anyone I’ve ever seen.” Back in Switzerland, Hofmann dispensed with her boyfriend, sold her clothing store and traveled back to Africa to take up a passionate relationship with Lketinga. Her prose is snappy and pointed; sentences are kept brief throughout, chapters often ending after just two or three pages. Although this clipped style can occasionally be distracting, Hofmann’s description of life in the bush with Lketinga is fascinating. The conditions in which she lived were completely alien to her, sometimes potentially life-threatening; the narrative unravels at breakneck speed in a series of visceral, pulse-racing adventures. The lovers married and struggled constantly in their attempts to understand each other. They ultimately had a child, but that seemed to drive an even greater cultural wedge between them. Hofmann shapes this linear story like a fiction narrative, complete with a “plot” containing generous lashings of romance and drama. (A German-language film adaptation premiered at the Toronto Film Festival last year.) In the end, it comes off as a cross between a wildly imagined novel and a confessional diary.

Unusual and highly addictive entertainment, although more cynical readers may wonder whether the author exaggerated certain events for dramatic effect.