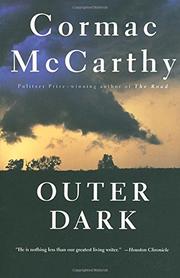 The Outer Dark, on the perimeter of nowhere, is the second one of Cormac McCarthy's penumbral, parabolic tales (The Orchard Keeper—1965) which resist time and specific definition. Against a landscape as sparse as the trees on the ridge just yonder, anonymous characters, the ferryman, the snake hunter, the beekeeper, the preacher, pursue an unyielding existence. Only a little more identified here are Culla Holme and Rinthy, his nineteen-year-old sister who has just had (his?) child in a cabin. A day or two later he tells her it has died, while going off with the tinker to leave the child elsewhere (where?). Rinthy as soon as she is strong enough goes on her long search to find the tinker and her child; Culla follows her with death rubbing shoulders here and there to the end of a dusty road—the tinker strung up on a tree, the child with empty, unseeing eyes. . . A somnolent fascination, a spectral charade, but for whom?