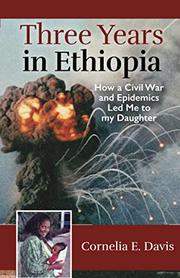 How a Civil War and Epidemics Led Me to My Daughter
by Cornelia E. Davis
BUY NOW FROM
AMAZON
BARNES & NOBLE
LOCAL BOOKSELLER
GET WEEKLY BOOK RECOMMENDATIONS:

In this memoir, a doctor recounts working in Ethiopia as its civil war rises to a fevered pitch and her struggle to leave safely with an infant girl she intends to adopt.

Davis (Searching for Sitala Mata, 2017) longed for a respite from her work as a physician for UNICEF in Senegal, and headed for Addis Ababa, the capital of Ethiopia. But she had more than restorative leisure on her mind—she was interested in pursuing a position with WHO as an epidemiologist battling the spread of meningitis, a deadly problem throughout Africa. In addition, she wanted to adopt a child, specifically an infant daughter. She surmised that the process in Ethiopia would likely be less bureaucratically onerous and expensive than in the United States as well as less prejudiced against older mothers—Davis was 43 years old at the time. But for all its beauty and culture, Ethiopia also had an “authoritarian government” riven by violent internal conflicts. And armed rebels in the north agitating for political autonomy were increasingly making progress. The author learned that boys as young as 14 were disappearing—recruited to join the conflict as soldiers—and that families had begun to hide their male members. The situation in the capital worsened with alarming speed, until the American embassy, followed by the United Nations, ordered the evacuations of nonessential personnel, a deterioration portrayed by Davis with the artful drama of a novelist. Obeying some inner voice, she chose to stay, a moment poignantly conveyed in her memoir: “I replaced the phone in its cradle and took a deep breath. I sat there letting the enormity of the situation sink into my brain. I had just volunteered to stay in a war zone because my intuition was telling me to stay.” The story is a gripping one, and crescendos with the doctor ultimately meeting the orphaned child she knew “in an instant” would be the girl she would adopt. In addition to a riveting account of her personal experiences, a recollection aided by black-and-white photographs from various sources, Davis also provides a thoughtful synopsis of the history that led Ethiopia to such peril.

A thrilling war remembrance, as moving as it is historically instructive.