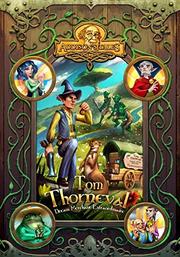 From the Addison's Tales series

In this fairy tale for middle-grade readers, a misfit dream maker goes on a quest for riches and finds himself on a completely different path toward self-worth.

Wingless half fairy Tom Thorneval has fallen in love with a fairy named Mary, and dreams of a future in which the two of them could start a new tribe of fairies, away from those who might judge Tom for being half shape-changer. To create a new future, he decides to sell his dreams at the Grand Goblin Fair and bring home gold and jewels. But the fair is difficult to find, and Tom meets no end of difficulties along the way. First, imps destroy most of the dreams he made to sell; then, he encounters a troll, a riddling dwarf, a male half witch/half fairy named Bill, and a number of other crazy forest dwellers. At one point, readers have the option to choose Tom’s path: left or right. (As in the Choose Your Own Adventure books, readers then skip ahead to the appropriate page as prompted, but the reader soon ends up in exactly the same spot either way, so it feels like a misplaced feature.) Tom has a strange interaction with either a satyr or a crafty frog and his minions, depending on the path. He then decides that in order to make money, he must change his recipes and start making nightmares. When the local fairy glen decides that this is unbecoming behavior for a dream maker, they force him to stop and set him on a path farther away from the fair but toward becoming a better person (and a Dreammaster). Tom is a down-to-earth narrator, and his dream making is as clever as Roald Dahl’s in The BFG (1982). His adventures are also reminiscent of traveling through Lewis Carroll’s Wonderland, and the driving later subplot of the book, in which a rival dream maker tries to eliminate his competition by stealing from Tom and setting him in harm’s way, ends well. Although the book is the first in a planned series, the story feels complete and self-contained. It also includes QR codes to play the music included in the book, which is a nice touch for readers with the proper technology.

A charming introduction to a world of fairy creatures, featuring a good-hearted narrator who grows into a better person.