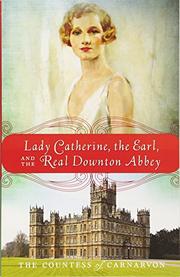 LADY CATHERINE, THE EARL, AND THE REAL DOWNTON ABBEY

A second sprightly memoir by a real English countess (after her Lady Almina and the Real Downton Abbey) delineates her forebear’s heyday from the Roaring ’20s.

The name Lord Carnarvon will be familiar to American readers as the discoverer, along with Howard Carter, of Tutankhamun’s tomb in 1922. Carnarvon’s real-life English home, Highclere Castle, became the filming location of the present-day PBS series Downton Abbey, and his class’ shenanigans the inspiration for many characters. Carnarvon died shortly after his amazing discovery (“the curse of Tutankhamun”), leaving his 20-something son to inherit the title of Earl of Carnarvon and all the trappings (and debts) of Highclere. In this book, the author takes up the saga of the new earl, Lord Porchester, “Porchey,” a high-living sportive type, and his new bride, Catherine Wendell, a vivacious, American-born young woman who had been brought up in England after her father’s death when she was 12. Enormously wealthy and well-connected, the couple had two children during the 1920s yet grew alienated as a result of Porchey’s womanizing and divorced in 1936, just as another aristocratic scandal, involving the Duke of Windsor and Wallis Simpson, erupted. Porchey never had much luck finding a suitable replacement for Lady Carnarvon, while Catherine remarried happily yet lost her second husband when he was killed during the war. The author, the present Countess of Carnarvon, digs into the archives with relish for a lively sense of how the glamorous old houses were run, both upstairs and downstairs. Although her tone is rather gushing, her familiarity with this romantic era between the wars lends a winning accessibility for all readers.

Gossipy and fun, with a good history lesson—sure to delight Downton Abbey fans.

A SHORT HISTORY OF ENGLAND
by Simon Jenkins
Nonfiction

THE MARRIAGE OF TRUE MINDS
by L.L. Field
Indie

A FINE HOW DO YOU DO
by Patty Dickson
Fiction