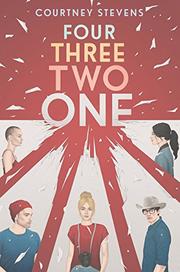 Four teenagers whose sense of normalcy shattered when they became the only survivors of a bus bombing in New York City are invited to an artist’s re-creation of the damaged vehicle.

Golden and Chandler were together on the bus when it exploded. Since the event, a distance has grown between them that is only exacerbated by the invitation. Chan is stoic and craves stability, which he finds in their communal Kentucky home known as the Hive. Golden finds the Hive—and their relationship—stifling. Her thoughts and feelings keep drifting toward Rudy, another survivor who briefly caught her fancy that fateful day before the explosion. When Chandler refuses to attend the art opening, Golden and her uber-confident friend Becky hit the road, with the compass pointing toward Rudy in Florida. There, they also collect Caroline—who is Rudy’s cousin, the final survivor, and the girlfriend of the bomber. Caroline cannot stop heaping punishment on herself. What follows is a messy road trip where hearts break, secrets are revealed, burdens are dropped, and each character stumbles closer toward forgiveness. The terrifyingly realistic plot and compelling characters (seemingly all white but diverse in physical abilities—Rudy uses a wheelchair—and sexuality—two girls are in a same-sex relationship) will immediately hook readers’ attention even as the dialogue at times meanders into magniloquence.