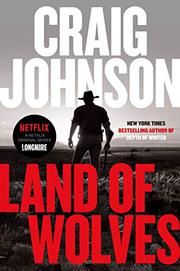 Back from Mexico, where his war against a drug lord (Depth of Winter, 2018) very nearly cost him his life, Walt Longmire, Sheriff of Absaroka County, Wyoming, is having trouble regaining his strength and characteristic swagger. Things at first seem fairly straightforward: A wolf designated 777M may or may not have killed a sheep. Longmire and his undersheriff, Victoria Moretti, begin to investigate—the sheep’s DNA will be analyzed, a predator—wolf or mountain lion—will be identified. Either way, 777M has rattled the populace, and wolf panic has set in. It seems inevitable that 777M will be hunted down, and much as he regrets this, Longmire cannot do much to prevent it. Keasik Cheechoo ("Cree-Assiniboine/Young Dogs, Piapot First Nation, a Native wolf advocate,") appears to plead the wolf's case, but Absaroka County's legal structure has taken the process out of the sheriff's hands. Other Native characters contribute to the narrative: Henry Standing Bear, a Northern Cheyenne, offers Longmire counsel, and for a while it seems 777M may be a manifestation of the spirit of Virgil White Buffalo, who helped Longmire in the past. Henry Standing Bear is a vivid and appealing character, but the suggestion of a spiritual involvement is ultimately unrequited. As the investigation goes on, things get much more complicated. The sheep belonged to Abarrane Extepare, a second-generation Basque American and one of the richest men in Absaroka County, and was herded by a Chilean shepherd named Miguel Hernandez. When Longmire and Moretti find Hernandez, he has been hanged, and though suicide is a possibility, a reasonable case can be made for murder. The investigation widens, and the dynamics and particulars of sheep farming, of migrant labor and shepherding, and of land use in general are ably explored through the history of the Extepare family. And it is in the family that the mystery finally finds a structure and Longmire finds a solution.

Sometimes informative and sometimes murky but overall a rewarding journey to Absaroka County.