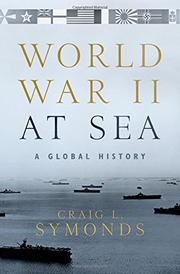 A veteran maritime historian delivers a satisfying one-volume history of “the impact of sea services from all nations on the overall trajectory and even the outcome” of World War II.

The massive naval campaigns of 1939 to 1945 remain the largest in history and will probably never happen again. Though there have been hundreds of books about this subject, readers will welcome this fine account from a highly qualified guide. Symonds (Maritime History/U.S. Naval War Coll.; Neptune: The Allied Invasion of Europe and the D-Day Landings, 2014, etc.) emphasizes that because no navy was fully prepared for war in 1939, everyone got it wrong. Neither Hitler nor his naval chief gave priority to submarines, so Germany began the war with too few and never caught up. Despite many horrendous sinkings, ably described by the author, 99 percent of Allied ships reached their destinations. Many historians now agree that U-boats never came close to cutting off supplies to Britain. The far more successful American submarine campaign wreaked havoc on Japan’s merchant fleet, bringing the country close to starvation in 1945. It’s a cliché but also true that most pre–WWII naval planners failed to realize that air power made their first love, battleships, obsolete. A minority of Japanese admirals understood, and the two-year delay before America’s entry into the war allowed American officials to realize what they needed. Rocking no boats, Symonds agrees that the Allied victory resulted from British stubbornness at the beginning, followed by Russian blood and American industrial production. He adds that brains, luck, and enemy stupidity remained essential, enabling America to turn the tide against Japan in 1942 at Midway and Guadalcanal with inferior forces.

No revisionist but a solid storyteller and naval scholar, Symonds mixes politics, strategy, sea battle fireworks, technical details, and personal anecdotes to deliver one of the better single-volume histories of the naval portion of WWII.