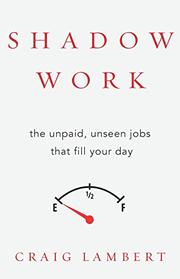 The Unpaid, Unseen Jobs that Fill Your Day

Former Harvard Magazine deputy editor Lambert (Mind Over Water: Lessons on Life from the Art of Rowing, 1999) reviews the effects on the labor force of practices such as self-checkouts at grocery stores and how they are reducing the availability of entry-level jobs.

The author profiles how such changes tend to eliminate these jobs and consumers' own labor is used as a substitute for the lost employment. Lambert attributes the readiness to accept such increased burdens to a submissive “middle-class serfdom” produced from a work ethic of self-reliance. These days, shadow work “represents a major—and hidden—force shrinking the job market.” The shift, writes the author, is often based on consumers' lack of awareness, since “to get millions of people doing shadow work, it’s imperative to avoid consumer choice in the matter.” Do-it-yourself types of labor, undertaken voluntarily—at the gas station, a food-dispensing kiosk, or online at home—eliminate services that have been taken for granted, and the DIY movement is attractive to consumers seeking to reinvigorate their lifestyles. Downsizing, technological attrition through automation, and the outsourcing of the menial tasks of a business’s operations are some of the causes behind this global transformation for prospective employees and the unemployed—the author cites a World Economic Forum statistic that "young people aged 15 to 24 make up 17 percent of the global population but 40 percent of the unemployed." Lambert examines a variety of industries, including retail trade, food service and restaurants, airlines and travel, highlighting ongoing changes and their effects. Many of the jobs that are being replaced by shadow work are entry level. Without the entry-level jobs—e.g., bank teller, office secretary—the author wonders whether anyone will be able to build the skills necessary to work his or her way up the pyramid of opportunity.

An appealingly different view of employment based on what people actually do and not just statistics.