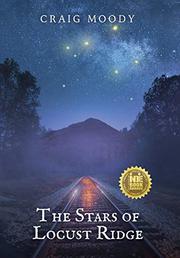 THE STARS OF LOCUST RIDGE

A young woman finds herself trapped in an unnatural crisis in Appalachia in this novel.

Walking through the woods one early spring night in 1973, 16-year-old Genevieve Delany witnesses a phenomenal scene: “Like flittering hummingbirds, seven stars flickered and darted over the night sky in unison.” Growing up with her single, working mother in a Tennessee town laden with poverty, Gen is often left under the limited supervision of her reclusive Uncle John. The night after her vision and throughout the following weeks, she becomes plagued by eerie and inexplicable events. John finds her in the woods at night, screaming and unaware of her surroundings, often with clothing askew and blood between her legs. The next day, she is always mentally disoriented. After an altercation leads to her expulsion from school, she is offered private tutoring sessions with a former teacher. Edna Stevens is a firm but kind elderly woman, forced into early retirement because of her relationship with her partner, Janice Everly. When Janice (whose behavior appears at times erratic and delusional) claims to have seen the same moving lights and attributes them to extraterrestrial visitations, Gen barely knows what to believe. Little does she know that her search for the truth will uncover not only dangerous new information, but dark secrets surrounding her family history as well. The insular setting of the Appalachian town provides rich material for this atmospheric mystery. Moody’s (His Name Was Ezra, 2018, etc.) descriptions of the surrounding woods are both beautiful and unnerving. Furthermore, the gender dynamics, social expectations, and power structures present in the tale create a telling reflection of the time period. Gen consistently proves herself to be a willful and capable character whose narration is a pleasure to read. The author captures the heat of teenage passion well and addresses the consequences with raw emotion. Although the story’s events are bizarre and sometimes disturbing, the delivery is riveting. The expert pacing will keep readers on edge from start to finish.

A suspenseful, pulse-quickening read that combines elements of psychological horror and cryptic folklore.