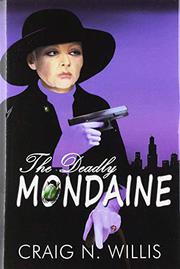 In Willis’ debut thriller, a seemingly meek retirement home resident handles unsavory types by using skills that she picked up during a career as a professional assassin.

In many ways, 84-year-old Hattie Rosales is like other residents at Shady Rest Retirement Home in Gethsemane, Illinois. However, she’s also a former hitwoman who doesn’t actually need the wheeled walker she uses, and when racist resident Dottie Tyler threatens to call Immigration and Customs Enforcement on a Guatemalan Shady Rest employee, Hattie decides to kill her. Periodic bits of backstory reveal that Hattie, as a young wife and mother, met Ludmilla “Milly” Netsurov at a Tupperware party in 1961. The two eventually turned the parties into a business called M&H, but they later earned the bulk of their profits from murder for hire, arranged by a man named Sid. In the present day, Hattie offs two more people, making the deaths look like accidents. This doesn’t stop police chief LaTasha Cranton from poking around Shady Rest. LaTasha recognizes Hattie’s sharp intelligence and accepts her advice on an active homicide case—the shotgun slaying of wealthy businessman Jack Mortensen. However, LaTasha also begins to suspect that Hattie had something to do with the recent Shady Rest demises, leading to a battle of wills between two savvy women. Willis’ novel showcases two multifaceted characters and provides parallels between them; although they’re on opposite sides of the law, Hattie and LaTasha, both people of color, have experienced sexism and racism throughout their lives. They’re also both exceedingly likable. (It helps, of course, that the people whom Hattie kills at Shady Rest aren’t remotely sympathetic.) Startling moments arise naturally, as in a scene in which Hattie cleans out a safe deposit box that’s filled with goodies from her former profession. Various mysteries creep into the narrative, involving the Mortensen investigation and Milly’s unexplained death years ago. The latter case is easy to figure out, but the book’s overall resolution offers a pleasant surprise.