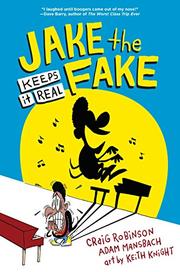 JAKE THE FAKE KEEPS IT REAL

From the Jake the Fake series, volume 1

Black sixth-grader Jake Liston can only play one song on the piano. He can’t read music very well, and he can’t improvise. So how did Jake get accepted to the Music and Art Academy? He faked it.

Alongside an eclectic group of academy classmates, and with advice from his best friend, Jake tries to fit in at a school where things like garbage sculpting and writing art reviews of bird poop splatter are the norm. All is well until Jake discovers that the end-of-the-semester talent show is only two weeks away, and Jake is short one very important thing…talent. Or is he? It’s up to Jake to either find the talent that lies within or embarrass himself in front of the entire school. Light and humorous, with Knight’s illustrations adding to the fun, Jake’s story will likely appeal to many middle-grade readers, especially those who might otherwise be reluctant to pick up a book. While the artsy antics may be over-the-top at times, this is a story about something that most preteens can relate to: the struggle to find your authentic self. And in a world filled with books about wanting to fit in with the athletically gifted supercliques, this novel unabashedly celebrates the artsy crowd in all of its quirky, creative glory.

A fast and funny alternative to the Wimpy Kid.