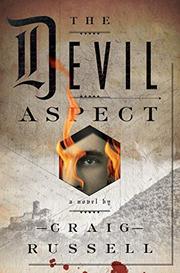 In 1935 Prague, vicious murders are linked to a medieval castle housing an insane asylum outside the city in this well-crafted gothic crime tale.

Psychiatrist Viktor Kosárek tests his theory about the evil in humans on the six inmates—the “most notorious cases in Central Europe”—of the Hrad Orl? Asylum for the Criminally Insane. Prague Police Kapitán Lukáš Smolák, the vegetarian son of a butcher, hopes a glass bead at the latest gory crime scene will help identify the serial killer Leather Apron. As these two storylines converge, Russell (The Quiet Death of Thomas Quaid, 2016, etc.), a Scottish author making his U.S. publishing debut, plants tantalizing parallels. Take the bead: One inmate’s husband (whom she cooked and fed to his sister) sold glass beads like the one Lukáš found. The Kapitán heads to the asylum to consult one of the so-called Devil’s Six, who is a glass expert and earlier mentions beads known as the Tears of Perun from Slavic mythology, part of a rich vein of lore and legend that Russell weaves into the narrative. The asylum cases have “odd commonalities,” particularly a demonic figure who abets or is blamed for the violence. Plausible perps abound. Lukáš dreams of helping his father slaughter one of Leather Apron’s victims. Lukáš’ medical examiner is the twin of one of the six nasties. The head of the asylum mysteriously disappears into his office for days. In the background but never forgotten is the rising political threat from Germany, the “Madness of the Many.” A seasoned writer, Russell keeps the police case moving at a good clip, more so than the clinical narrative and its unavoidable repetitions. Each has nice surprises but nothing to match the ending, which offers more twists than a Chubby Checker album.

A smart, atmospheric, and entertaining read but not for the Jung and easily Freudened.