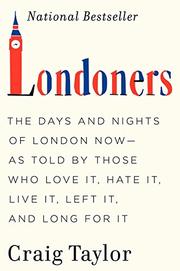 The Days and Nights of London Now--As Told By Those Who Love It, Hate It, Live It, Left It, and Long for It

A Canadian playwright and literary-magazine editor ponders the love and hate for London, sifting through hundreds of interviews with the denizens.

Living for a time in the city, Taylor (One Million Tiny Plays About Britain, 2009, etc.) is clearly fascinated and fond of the place and those who manage to thrive there, even if he is still mystified by who is and isn’t a “Londoner.” With 32 boroughs (New York only has five), London is truly a city of villages and takes its postcodes very seriously. Cleverly, Taylor organizes his masses of voices by “people who worked with the stuff of the city.” His subjects include a male nurse; a street photographer; a nightclub door attendant; a manicurist who offers her singularly wise take on the strata of society; a personal trainer who tries to smarten up his clients but finds the shoulders and the alignment give out immediately; the black actress who got tired of being cast as a slave and now plies her trade as a plumber; a beekeeper atop the Royal Festival Hall; a gay man who depicts the best cruising spots; the female voice of the London Underground who reveals that even the officials couldn’t decide how to pronounce the stop “Marylebone.” From the well-heeled Pakistani currency trader near his office across from Bank station to the transsexual “skipper” (“forager for waste food in the skips”) on the streets in South London, the stories are alternately poignant, uplifting, amusing and sad.