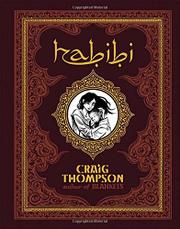 Thompson (Good-Bye, Chunky Rice, 2006, etc.) returns after a five-year absence with a graphic novel that is sure to attract attention—and perhaps even controversy.

Slavery exists in the modern world as much as in the ancient. As Thompson’s long, carefully drawn narrative opens, we are in a time that seems faraway, even mythical: A 9-year-old girl is married off to a scribe who introduces her not just to sex but also to the mysteries of Arabic letters, which seem to take life on the page. “When God created the letters,” Thompson writes, “He kept their secrets for Himself”—though he shared them with Adam while keeping them from the angels, a source of considerable friction in the Muslim heaven. The scribe is killed, the young girl kidnapped, and from there the story opens into a world that might well have come from the Tales of a Thousand and One Nights, if, that is, industrial machinery and the teeming ports of the Arabian peninsula are introduced into the backdrop. Dodola and Zam are two children, one Semitic, one black African, who brave a hostile world, taking up residence in a ship marooned in the desert sands, selling what they have and can in order to survive. As they grow older, they find themselves feeling things that are not quite appropriate for the siblings they seem to have become, and now their paths part, destined to cross again as sure as the letters loop over one another. Thompson draws on elements of classical Arabic mythology and, a touch dangerously, Islamic belief; he also takes the opportunity to address modern issues of ethnic tension, racism, the ongoing conflict in the Middle East and the clash of civilizations, sexism and other modern concerns. Though in the form of a comic book, Thompson’s story is decidedly not for youngsters: Rape and murder figure in these pages, as does sex between minors.

A mature—in all its meanings—glimpse into a world few Westerners are at home with, and Thompson is respectful throughout.