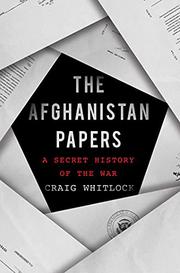 A Secret History of the War

The war in Vietnam was always controversial. The longer quagmire of Afghanistan, writes Whitlock, “was grounded in near-unanimous public support” when it began in 2003. There was no need, then, for the Pentagon brass to lie about the war, but lie they did, despite that fact that there was not a clearly articulated mission. The mission crept into a vaguely defined exercise in nation-building even as more than 775,000 U.S. troops cycled in and out of the country. Whitlock’s impressively documented book contains interviews with more than 1,000 participants in the war. The author also examines a report titled “Lessons Learned,” which, though inches thick, seems to have emerged only long after the damage was done (and $1 trillion disappeared into the ether). One curious diagnostic among many uncovered in this comprehensive overview: Early on, American troops had to fly their laundry to Uzbekistan, since there were no facilities in Afghanistan, whereas the base at Bagram soon sported “a shopping mall, a Harley-Davidson dealer and about 30,000 troops, civilians and contractors.” Bush administration officials could never wrap their heads around the fact that the Taliban and al-Qaida were distinct entities and were convinced that anyone willing to fight against them was a friend of the U.S. Those presumed allies milked a gullible U.S. dry. One interviewee notes that the U.S. misadventure could have ended in weeks if direct negotiations with the Taliban had been undertaken. Instead, enemies were misidentified and innocent people killed so frequently that one officer reported that some units were “focused in consequence management, paying Afghans for damages and condolence payments.” That Joe Biden was able to order America’s withdrawal redefined the terms of victory to say that the U.S. “had achieved its original objective long ago by destroying al-Qaeda’s stronghold in Afghanistan”—rather than acknowledge that the Afghans had defeated their second superpower.

By this authoritative account, the Afghanistan War has been a colossal failure that should have been ended years ago.