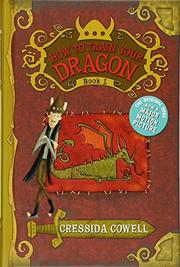 HOW TO TRAIN YOUR DRAGON

Facing sneering peers, plus a cave full of vicious young dragons and two mountainous, malign adult ones, brings an ordinary Viking lad around to becoming a “Hero the Hard Way” in this farcical import. Dispatched to capture and train some breed of dragon as a rite of passage into the Hairy Hooligan Tribe, unprepossessing Hiccup Horrendous Haddock III returns not with a mighty Gronkle, or an aptly named Monstrous Nightmare, but a shrimpy creature laughingly dubbed “Toothless”—who also turns out to be about as trainable as a cat, with an attitude to match. But Hiccup and Toothless develop into a doughty team when two humongous, fire-breathing Sea Dragons pull up to shore, looking for the odd village or army to devour. Cowell adds lots of jagged, William Steig–like sketches to a narrative rich in dragon muck, cartoon violence, and characters with names like Snotlout and Dogsbreath the Duhbrain. Her genuinely fierce, intelligent, and scary dragons nearly steal the show, but Hiccup and his diminutive sidekick ultimately come out on top, both displaying a proper hero’s mix of quick wit, courage, and loyalty. (Fiction. 10-12)