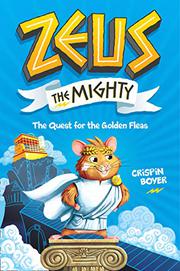 THE QUEST FOR THE GOLDEN FLEAS

From the Zeus the Mighty series, volume 1

A center for rescued pets becomes the stage for adventures of literally mythical import in this series opener.

Convinced that they’re the gods after whom they’ve been named by the Mount Olympus Pet Center’s myth-loving owner (and Boyer drops hints that they’re not wrong), Zeus, a rescued hamster, and allies Demeter, Athena, and Ares—respectively a cricket, a tabby cat, and a scene-stealing pug of big stomach but little brain—get out at night to face such challenges as the deadly whirlpool of Charybdis (a stuck toilet). After listening (not very attentively) to a podcast version of “Jason and the Argonauts,” Zeus decides to settle a long-standing rivalry with a pufferfish named Poseidon by returning in triumph with the “Golden Fleas.” Little does he know that the quest will take him into Uncharted Territory (the empty store next door) where shrieking harpies (bats) lurk….While all of this doesn’t map very closely on the original yarn, it does offer opportunities aplenty for displays of courage, cleverness, and loyalty…as well as lots of comical byplay. Elkerton adds to both the comedy and the drama with vignettes and larger scenes of partly anthropomorphic animals in chitons and divine regalia, often looking dismayed or, in Ares’ case, ever on the lookout for Mutt Nuggets. A closing section includes further information on the source story and Greek myths in general.

A treat for proto–Percy Jackson fans.