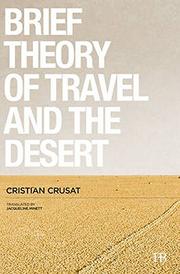 A BRIEF THEORY OF TRAVEL AND THE DESERT

A slim volume of six stories translated from Spanish focusing on the difficulties of communication and on the beauty—and emptiness—of the natural world.

Crusat moves easily between dialogue in which conversations don’t quite intersect and philosophical observations that frame human relationships. “Campsites,” the opening story, serves as a good introduction to Crusat's method. Two people, Olivieri (the narrator) and an unnamed young woman, engage in conversation by their trailers, which are parked in a seedy campground in blazing desert heat. Olivieri is actually with two other women, Nola and Hazel, but seems more attracted to the intimacy hinted at in the other camper’s voice. And perhaps he needs to get away from the irrationality of Nola, who wears headgear supposedly to “protect her against radiation. Electricity, power lines, transmission towers, hidden radio waves....It saps her energy.” As is usual in Crusat’s world of human relationships, Olivieri and his neighbor in the next trailer have the possibility of making a connection but don’t actually do so. The final story gives its name to the entire volume, and once again we find ourselves in an unpromising desert environment in southern Spain. Ben and Magali have recently met so can scarcely be considered connected, yet a Russian hitchhiker has recommended a beach to them. When they arrive, they discover that it’s a nudist beach, and their shedding of clothes begins to allow them to shed some of their inhibitions as well, though the poignant final line of the story could serve as an epigraph to all of Crusat’s stories: “Final hypothesis: Our souls are empty, but they need movement.”

Haunting stories of sorrow and isolation.