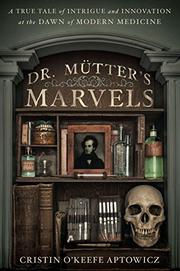 Biography of a flamboyant surgeon who helped transform American medicine.

A leading figure at Philadelphia’s Jefferson Medical College in the early 19th century, Dr. Thomas Dent Mütter (1811-1859) won acclaim for his remarkable reconstructive surgeries on deformed patients (with bad burns, cleft palates, mangled faces, etc.) whom most people dismissed as monsters. His hands were “a confident blur of motion” as he worked to alleviate the suffering of patients, writes poet Aptowicz (The Year of No Mistakes, 2013, etc.), whose earlier screenplay on Mütter won many awards. “Where others once saw a monster, Mütter thought, he had revealed the man.” In her deftly crafted narrative, the author provides an absorbing account of the charismatic surgeon’s life and career as well as a vivid look at the medical practices and prejudices of his time. His students adored him, and the disfigured flocked to him. European contemporaries saw him as a “dashing, outspoken, idiosyncratic American visionary.” In an era when many physicians were callous, medical rivals often balked at the kindly Mütter’s successful introduction of such innovations as recovery rooms, clean surgical areas and the use of ether anesthesia in surgery. After treating a man who suffered from elephantiasis, the surgeon took up a collection for him. Aptowicz draws nicely on Mütter’s speeches and lectures to reveal the depth of his empathetic philosophies and humanist approach. In his teaching, he made extensive use of an unusual collection of some 2,000 anatomical specimens—diseased bones, skeletons, deformed organs preserved in jars—as well as paintings, drawings and instruments. These “marvels” formed the core of Philadelphia’s popular Mütter Museum, which opened in 1858.