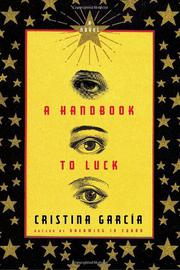 A HANDBOOK TO LUCK

The fortunes of three vividly characterized protagonists are deftly delineated in the Cuban-born author’s fourth novel.

Its structure of juxtaposed episodes follows the pattern employed in her earlier books The Agüero Sisters (1997) and the NBA-nominated Dreaming in Cuban (1992). In a compound narrative spanning the years 1968–87, we observe the distinct paths traveled and the hopeful meetings of a young Cuban immigrant (Enrique Florit), a refugee from El Salvador’s political violence (Marta Claros) and the daughter of a prosperous Iranian family (Leila Rezvani) who’s reluctant to be trapped in a loveless arranged marriage. We first encounter nine-year-old Enrique living in Los Angeles, after he and his widowed father, Fernando (a stage show magician), have fled Cuba following the Castro revolution. Over the ensuing years, Enrique survives both grief over his mother’s death (in a freak onstage accident) and his flamboyant “Papi’s” parental deficiencies and financial irresponsibility, fending for himself when the pair move to Las Vegas and he discovers his poker-playing skills. Parallel narratives depict Marta’s victimization by her mother’s emotional inertia (after her father has left them), as well as their country’s brutal military police, from all of which she escapes to California and a safe (albeit compromised) marriage; then Leila, whose family’s peregrinations bring them to America and her into surprised, and tempting, contact with Enrique. García braids their stories together skillfully, making us accept coincidences that bring them together, however briefly, embedding serious political and familial issues in subtly presented personal relations. The amusing extravagances that crop up (e.g., Papi’s efforts to channel the energies and artistry of a legendary Chinese conjurer) never compromise their credible, endearing humanity. Best of all, the permutations of bad and good “luck” that shape their individual and shared lives are quite ingeniously compared and contrasted.

Another winner for García.