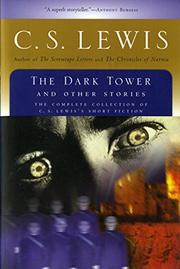 THE DARK TOWER AND OTHER STORIES

No scholar ever wore his learning more modestly than C. S. Lewis; no essayist ever got to the point more matter-of-factly; no story-teller ever conveyed greater happiness in his own "making," as he might have called it. And probably no writer would have been more ruthless in pruning various incomplete odds and ends of his literary estate, if he had been able to get round to it. One is bound to have mixed feelings about the attempt of Walter Hooper (Lewis' former secretary and a trustee of the estate) to salvage the uncollected and unfinished fiction. The present volume includes two stories which were never published in Lewis' lifetime, two which appeared in The Magazine of Fantasy and Science Fiction, and two fragments of longer narratives. The first of these, The Dark Tower, is by far the most impressive thing in the collection, apparently the beginnings of an unfinished sequel to Out of the Silent Planet. The basic premise—a parallel world with a two-dimensional time going not only backwards and forwards but "eckwards" and "andwards"—is delightful, and the groundwork of the plot is laid out with such confidence that one wonders how Lewis could have borne not to finish it. At the other end of the gamut, a fragmentary retelling of Helen and Menelaus' return from Troy is oddly bereft of energy. "Forms of Things Unknown," cast in the form of a rather trivial moonexploration story, works a splendid and wholly unexpected change upon a more frightening myth; "The Man Born Blind" plays clumsily but movingly (and chillhillingly) with the idea of newly acquired sight. The two M.F.S.F. stories remind us of a less welcome Lewis: the patronizing and avuncular pigeonholer of other people's departures from the path of true belief. This Lewis is intermittently visible through the whole collection—sneering at "modern" young women who discuss sex frankly, trivializing a grown man's homosexual impulse into a schoolgirl crush, smugly imagining the "shoddiness" of an inoffensive girl's mental universe. Time has dealt both kindly and unkindly with Lewis. One is keenly aware that the English language has not changed for the better in the thirteen years since his death. It is a pleasure to listen to this voice again, but not always to hear what it is saying.