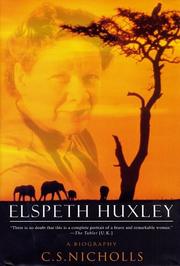 A sturdy biography of the Anglo-Kenyan novelist and essayist, the first such work devoted to her.

“Elspeth Huxley [1907–97] is best known for her writings on Africa,” writes English literary scholar Nicholls. “Yet as a young woman she was excessively impatient to get away from her parents’ farm there.” That impatience took Huxley (née Grant) to England, where she forged a long career as a writer of many kinds of prose, from radio scripts to lengthy memoirs. Only one of her books, The Flame Trees of Thika, published in 1959, was particularly well known in its time or is remembered today; Nicholls gives it, as well as Huxley’s other work, careful consideration, showing which parts accurately reflect Huxley’s childhood in Kenya and which are the products of pure invention. (“The book,” she concludes, “is a work of fiction, though many incidents are based on actual events.” Librarians and booksellers may thus want to reshelve it.) Huxley was intensely aware of her status as an overlooked writer, Nicholls remarks, though not particularly aggrieved by it. Some of her lack of fame she attributed to a dislike for the swirl of self-promotion (“I am a very bad public speaker and detest it, and hopeless on committees”), some to being dismissed by the literary establishment as a colonial, some to having spoken and written in qualified defense of white colonialism in Africa. Nicholls gives a good account of Huxley’s life and work, placing her in the milieu of the British East Africa of WWI and the England of WWII and beyond, charting Huxley’s course from ambitious youth to parsimonious, somewhat dotty old age. All the while, from decade to decade, as Nicholls capably documents, Huxley remained active and productive, championed by the likes of T.S. Eliot even as her readership dwindled and assignments came fewer.

A worthwhile glimpse into European colonialism and its literary chroniclers.