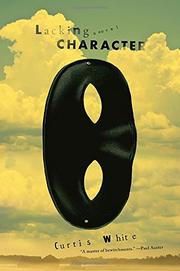 White (We, Robots: Staying Human in the Age of Big Data, 2015, etc.) merges the social satire of his fiction with his nonfiction’s interest in identity in the age of data totality.

In the city of N____ somewhere in central Illinois, a masked and leather-panted stranger named Percy has shown up at the door with a message to deliver to the Marquis, a hashish smoking “Halo” addict whose estate has fallen on hard times. Percy is a creature of the Queen of Spells—a sort of Morgan le Fey–esque fairy godmother from the Outer Hebrides—whose essential innocence is the result of his having originated as only so much “flabby cack,” to which he is probably destined to return. Meanwhile, his message—a request to enroll him in the local community college—is fatefully mismanaged, and Percy is lost among the sycophant sex predators, patricides, tattooed gym gods, and porn-faced burnouts that make up White’s bleak idea of 21st-century America. From this early point, the novel particulates into a swirl of styles, indulgences, and high-profile interruptions from the author himself. White’s latest exploration of the satire of social dysfunction is endlessly inventive and endlessly imitative—cribbing forms from such diverse masters as E.T.A. Hoffman, Jonathan Swift, Flann O’Brien, and many more. With nods to the pantheon of avant-garde cultists within whose milieu White swirls (David Foster Wallace, Paul Auster, Martin Amis, and Don DeLillo all come immediately to mind), the novel bills itself equally as a bomb tossed into the bunker of literary convention; an algorithm endlessly replicating the capitalist apocalypse; a picaresque through which White’s mad characters tilt at real giants disguised as miniature-golf windmills. The result is a profane wrestling match between high style and low comedy which owes as much to Rocky and Bullwinkle as it does to Gauguin’s Vision After the Sermon, though, like both, it requires a willing audience to witness its exertions.

Exhaustive and exhausting, the novel only sporadically comes together to present something like a vision, but in the ruin of its parts, some runic message might be scrawled. Or, then again, it might not.