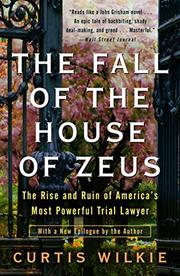 THE FALL OF THE HOUSE OF ZEUS

The Rise and Ruin of America's Most Powerful Trial Lawyer

Veteran journalist Wilkie (Journalism/Univ. of Mississippi; Dixie: A Personal Odyssey Through Events that Shaped the Modern South, 2001, etc.) produces a meaty biography extolling the rise and fall of an infamously lucrative trial litigator.

A 1976 graduate of the University of Mississippi Law School and former Navy pilot, Richard “Dickie” Scruggs’ early career as a lawyer was jumpstarted when he began representing shipyard workers from his Pascagoula hometown who were diagnosed with mesothelioma, a rare form of cancer. The ensuing lawsuits against the culprits, asbestos manufacturers, netted both the claimants and Scruggs millions in the ’80s. Fueled by cooperative whistleblowers and what he felt was a “lack of government regulation” on issues like tobacco, chemicals, physicians’ malpractice and substandard automobile design, Scruggs became a hubris-laden champion to the “powerless masses,” while concurrently becoming the target of angry politicians and corporate brass who lost constituents and corporate revenue. His co-involvement in prosecuting an array of tobacco companies “gave him an annual income projected at $20 million over a twenty-five-year period.” Scruggs went on to successfully tackle insurance companies who denied claims in the wake of Hurricane Katrina. However, he also cultivated and heavily financed shady associations with state auditors and professional partnerships. His marriage to Diane Thompson, sister to the wife of republican Sen. Trent Lott, afforded Scruggs a familial alliance that would become elemental as political overlords began zeroing in on his increasingly hushed activities. These peripheral pressures may have accounted for the attorney’s lack of proper judgment when his law firm was indicted and convicted of the bribery of a Mississippi state court judge twice, once in 2007 and again in 2009. Using data from print media, court transcripts, interviews, family meetings and from a particularly hard-won discussion with Scruggs’ son and junior law partner, Zach, Wilkie charts his subject’s serpentine legal and political machinations with dense, rich prose. While he honestly considers Scruggs “a friend,” his chronicle is even-keeled and unbiased.