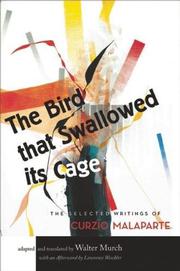 THE BIRD THAT SWALLOWED ITS CAGE

The Selected Writings of Curzio Malaparte

Unusual, engaging literary synthesis from a renowned film artisan and his private obsession, an Italian writer and political radical largely unknown in America.

Academy Award–winning editor and sound designer Murch (In the Blink of an Eye, 2001) notes that his initial encounter with the prose of Curzio Malaparte (1898–1957) “was like falling into a dream—or nightmare—tenuously balanced on the tightrope between real and surreal.” Malaparte, a soldier in both World Wars and a volatile political thinker, was both the youngest diplomat in Italian history and an early fascist who ran afoul of Mussolini. Murch suggests that “the problematic contradictions and collisions of Malaparte’s life seem like a sped-up film of the first half of the twentieth century”; he determined to bring the enigmatic author’s work to an English audience following his experiences working on the adaptation of The English Patient. An unusual aspect of the project is his decision to present some of the prose translation in “short lines of free verse... allowing it to breathe and permitting his startling images to be savored in a more measured way.” As Murch asserts, Malaparte’s writing is indeed dramatic and affecting, reminiscent of Camus’ social alienation and the amused misanthropy of Mencken, but with the pinpoint precision of fine wartime reportage and poetic engagement with natural landscapes beset by brutality. Overall, Malaparte’s stories derive from his personal observations in politics and combat, as in the chilling “The Gun Gone Mad,” which bears witness to the Nazi bombardment of civilian Belgrade through the eyes of a diplomat’s terrified hunting dog.

Sparkling prose drives a fascinating snapshot of a literary life buffeted by the great conflicts of his time.