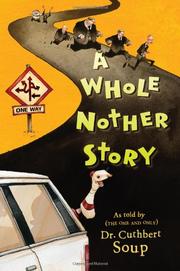 Three children and their inventor dad on the run from government agents, international superspies AND corporate baddies are finally forced to take a stand in this picaresque debut. Thanks largely to warnings from their psychic dog and the ability to pull up stakes in a New York minute, the Cheesemans have managed to keep themselves and father Ethan’s nearly complete time machine out of the clutches of squads of bumbling but relentless pursuers since the suspicious death of mother Olivia. Their luck is about to run out, however. Freely mining C.S. Lewis and Lemony Snicket for characters and plot elements, Soup also positively channels Dave Barry for type of humor, comic timing and general style. The result is less pastiche, though, than a grand escapade centered around a close family of smart, helpful, likable characters who run into all sorts of oddball wanderers on the road and show plenty of inner stuff when push comes to shove. Which it does, in a climactic melee marked by violent crashes, numerous minor wounds and a probable segue into a sequel. Great fun. (Fiction. 11-13)