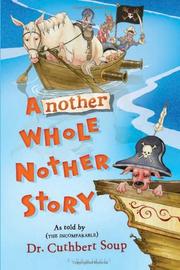 Slipping Dave Barry–style ruminations between each chapter, the pseudonymous Dr. Soup, world-famous “Advisor to the Ill-Advised,” strands the motley time-traveling cast assembled in A Whole Nother Story (2010)—including brilliant scientist Ethan Cheeseman, his three children (repeatedly described as “smart, polite, attractive, and relatively odor-free”), a psychic dog, a sock puppet and a crew of cursed but friendly pirates—in 1668 New England. Many misadventures and an Atlantic crossing later, after narrow escapes from witch hunters, a pirate of the unfriendly sort and other hazards, they proceed to Denmark to lay the aforementioned curse to rest (and run afoul of the local Duke’s evil step-twin in the process), after which the Cheesemans climb aboard a fresh time machine obligingly provided by the previous episode’s vengeful but woefully hapless villain Mr. 5 for the next stage in their quest to rescue their murdered mother. Fans of baroque misadventures, bumbling villains, heroic rescues, cliffhangers and especially sarcastic repartee—not to mention intrusive narrators—will be charmed anew. (Fantasy of the absurd. 11-13)