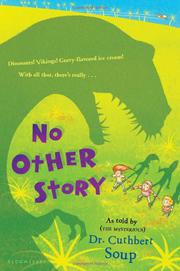 A once-entertaining tale about a widowed inventor who goes on the lam with his three above-average children (until he can finish building a time machine to dispel an ancient family curse and prevent his wife’s murder) drags its way to a conclusion.

Having taken care of the curse in the middle episode, Another Whole Nother Story (2010), "Soup" evidently finds that even with extensive padding—including an irrelevant flashback chapter and bit parts for the uncommonly intrusive author/narrator himself and his deaf mother—the culminating rescue makes only half a book. Accordingly, the author fills out the page count with a long and aimless stopover for the time-traveling Cheeseman family. This takes place in Some Times, an interdimensional mashup of eras, places and seasons where the Cheeseman children get glimpses of their futures from a worshipful descendent. Meanwhile, their father, convinced he’s Gioachino Rossini after a knock to the head, furiously (re)composes the William Tell Overture. The Dave Barry–like flurries of sententious tangents that previously added refreshing interludes of silliness to the storyline come across here as dull and labored, as do the heavy-handed caricatures of various corporate and government pursuers who are the tale’s villains.

Happy and (more or less) logical resolution aside, thin Soup.