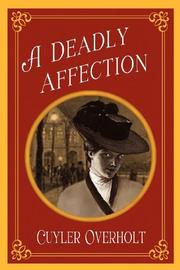 In Overholt’s historical mystery, a young female doctor in early-20th-century New York must solve a bloody murder for which she feels partially responsible.

In 1905 Dr. Genevieve Summerford finished third in her class at John Hopkins only to have her father disapprove of her decision to run a psychology research class for women with emotional trauma—a concerted effort in an emerging field to help people better their lives and prove that thoughts and feelings can influence body functions and health. Eliza Miner, a woman in Genevieve’s study group, confides that she’d had a baby as a teenager that was taken from her by her doctor. Discussing the incident and options of confronting the doctor regarding the location of the now 20-year-old child, Genevieve’s advice is misconstrued, and the following day the doctor is found brutally murdered—with Eliza standing over him covered in blood. Desperate to prove the innocence of her patient, find the real killer and salve her guilt for the inadvertent part she may have played, Genevieve must overcome a mountain of circumstantial evidence, confront a very powerful and influential family and subvert the stubbornness of the investigating officer who refuses to look any further than Eliza Miner. When Genevieve runs into Simon Shaw, a sordid reminder of her painful past, she realizes that the man who broke her heart may be the only one who can give her hope. Genevieve’s story is compelling, from her difficult childhood that encompasses the travesty of bearing the blame for the death of her younger brother to the tragedy of losing her innocence to a naive teenage indiscretion, with both bearing equal weight of guilt. Though she longs for the acceptance and forgiveness of her father, Genevieve’s unwavering determination to her profession allows her to remain steadfast and true. Replete with formal gowns and annual winter balls, Overholt’s novel successfully captures the feel and tone of 20th-century New York in a deeply pleasing, nostalgically modern way. A solid plot pulls the reader in with little effort, while strong, flowing prose and captivating characters provide the incentive to remain to the very last page. In Dr. Genevieve Summerford, Overholt has beautifully rendered a symbol of strength and perseverance in a time of severe gender bias. A well-paced, 20th-century whodunit full of dark secrets and fascinating intrigue that easily keeps pace with 21st-century standards.