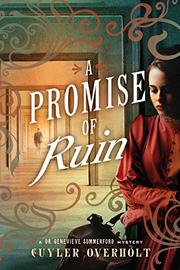 A PROMISE OF RUIN

A psychiatrist’s inquiries bring her up against the white slave trade.

Dr. Genevieve Summerford has already broken many boundaries by becoming a physician in early 20th-century New York (A Deadly Affection, 2012). Her wealthy parents are still not reconciled to her ongoing friendship with their former stableboy, Simon Shaw, now a Tammany captain who uses his position to do good in some of Manhattan’s poorest neighborhoods. Genevieve, who’s in love with Simon and hopes he returns her love, spends time helping with his boys' club, and as the book opens, she's watching his team row in a race on the East River. Simon’s boat is forced to drop out of the contest when the dead body of a young Italian woman dressed only in a coat and her underwear is spotted under a pier and they have to help drag her to shore. Genevieve becomes caught up in the investigation when a girl at the scene begs her to ask the police to find Teresa Casoria, a friend of hers who came from Italy to get married, got off the ship, and vanished. It turns out that the dead woman, Lucia Siavo, also came to New York to get married, which makes Genevieve worry about Teresa's fate. She meets Teresa's fiance, Antonio Fabroni, who tells her he was late getting to the pier, and Teresa wasn't there when he arrived. Someone else more punctual is evidently meeting young women off the boat, kidnapping them, and forcing them into prostitution. Though it’s not easy getting information from the fearful, closemouthed immigrants, Genevieve finds an ally in a brave young woman who stands outside brothels illegally passing out contraceptives. Genevieve’s investigation clearly puts her in danger despite her high social position, but she presses on, learning a great deal about her own inner demons, her feelings for Simon, and man’s inhumanity to woman before the complicated case is finally resolved.

Set against the historical backdrop of a city teeming with immigrants, Overholt’s second reveals the evils of a heinous trade that still goes on today.