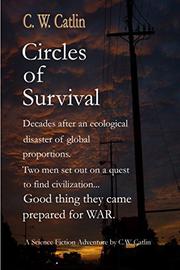 Two decades after the collapse of civilization, two resourceful survivalists try to protect a new city-state persevering in a savage future dark age.

“The end had not come as one defining gestalt moment; rather it had come as a slight change in the wind” begins Catlin’s post-apocalypse action debut. In the not-too-distant future, a combination of factors—climate change, resource and food depletion, wealth inequality, plagues, and, finally, wars—has destroyed organized society. Twenty-two years later, in the remains of California, Thomas Wolf, a savvy survivalist roaming the urban wastelands haunted by predator gangs and cloistered holdouts, finds a natural ally in Allen Damewood, another gentleman warrior with helpful talents in weaponry and technology. They set up housekeeping in a fortresslike dwelling where Wolf’s armaments include a thoroughly armored, weaponized, and computerized airport-facilities vehicle dubbed the Rig. The two imagine themselves isolated among roving packs of enemies and small, subsistence-level colonies. They are thus amazed when a reconnaissance helicopter crashes nearby. Though the crew perished, the copter seems to come from an advanced and functional human settlement somehow rising from the ashes nearby, and the two men take the Rig to investigate. Indeed, they do discover the future equivalent of an impossible Shangri-La. But they also encounter a deadly threat to the stronghold. The rest of the series opener turns into a fairly exciting battle, enough to keep pages turning. Catlin breaks little new ground in the “prepper” military-Armageddon genre, but he tells the muscular story well, with a couple of likable and smart bromantic leads—think Butch and Sundance with RPGs, battleground strategy, and combat software moxie. In some quiet spaces, characters persuasively lament the tragic yielding of community and goodwill to barbarism and total war, a cautionary tale for contemporary readers. The Rig itself is a cool creation, if a bit of a deus ex machina in the most literal sense. In addition, a ravishing redhead in the oasis is predictably available for Wolf. Enough loose ends hint at sequel possibilities, although this rousing volume can be read as a stand-alone.

This solid actioner with heart follows in the tank treads of a well-worn genre.