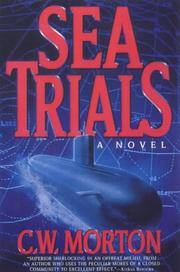 A breathless—in more ways than one’sequel to Morton’s Pilots Die Faster (1997) forces smart-alecky Navy sleuth Bud Wilson to find a murderer on a stricken nuclear submarine before a mysterious enemy sub returns for the kill. A routine inquiry into a sub accident that killed a crewman puts Wilson, a retired Viet Nam—era flyboy, now a special agent with the Naval Criminal Investigative Service, on board the USS Centurion, the Navy’s newest nuclear sub, as it undergoes sea trials: a series of maneuvers that will determine its seaworthiness. Just as the sub begins its first dive a few miles off the Virginia coast, a strange metallic bang fills the Control Room, and the officer who investigates is found with his skull bashed in. But before Wilson can begin to question witnesses, a series of mechanical failures resembling those that doomed the USS Thresher maroon the sub on the lip of a perilously deep undersea trench, where an unidentified submarine begins to make hostile moves. More corpses turn up as the crew, left with fewer than 36 hours of breathable air, grapple with nightmarish enemies within and without, physical and mental. Morton, a Navy lieutenant commander, uses Wilson’s hurried investigation to show how weird and fascinating submarines can be, dwelling at length on the superior strengths and unpredictable weaknesses of the crew, while piling on a series of increasingly life-threatening catastrophes. Among the usual suspects: a crewman who might be a homosexual, a doctor who might be a spy, and a hotheaded chief engineer, referred to by his acronym, CHENG, who is unusually protective of his command. Tight-lipped Captain Rilke might also know more than he’s willing to tell about the enemy sub, and the peculiar relationship between the Navy brass and Quantum Tech, the sub’s builder. Gripping suspense, intriguing detail, and a hearty, wide-eyed respect for the heroism of ordinary men.