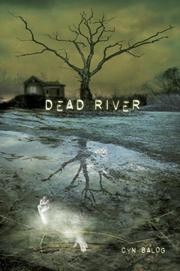 While most people who visit the Dead River hear the white noise of rushing water, 17-year-old Kiandra Levesque hears the voices of people the river has claimed.

She’s been kept away from water ever since her mother committed suicide by walking into the Delaware River 10 years earlier. Angry at this abandonment, she wants to prove to herself that she has left her mother behind, so she sneaks away with her boyfriend for a camping and rafting trip in rural Maine. When she encounters the spirit of a boy killed in the 1930s, Kia learns that she has magical powers and that she might be able to see her mother again—but that she must cross the river from life to death to do so. Balog starts her story in media res, allowing narrator Kiandra to introduce herself slowly, by revealing her past. There’s a trick to keeping the narrator mostly unnamed and identified only by fears for the first several pages, and unfortunately, the author doesn’t quite carry it off. Despite her heavy and often articulated misery, Kiandra comes across as a shallow character: clear, fast-moving and trickling downstream before making an impact. The inevitable love triangle feels forced, and the resolution stretches the bounds of the narrative rules, but at least it assures there’s no loose threads for a sequel. The secondary characters are oxbow lakes, extraneous pieces cut off from the main flow and leading nowhere.

Not the refreshing plunge it would like to be.