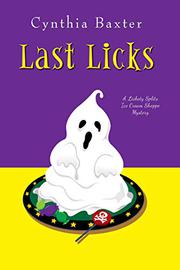 Against all the best advice, the owner of an ice cream shop pursues a sideline in detection.

Kate McKay, the proprietor of Lickety Splits Ice Cream Shoppe in New York’s beautiful Hudson Valley, has already had a run-in with murder while catering desserts for a glamorous gala (Hot Fudge Murder, 2019). Why she thinks that qualifies her for detective work is a mystery. Kate can’t pass up assistant movie director Chelsea Atkins’ lucrative offer to use her shop for a single day of filming, but she’s dumbfounded when actress Savannah Crane keels over after eating one of Kate’s fabulous ice cream creations. The investigating officer warns Kate off. So does her love interest, Jake, a former lawyer. But since the reputation of her shop has been jeopardized by Savannah’s poisoning, she’s not inclined to back down. Not even the advice of her Grams, who raised her and still lives with her, does any good. She and Emma, the niece who works part time at the shop, are both pleased that Grams has a man in her life: George Vernon, whom she met at the senior center and talked into helping with a big Halloween project at the local high school. Kate’s cautious about her own relationship with Jake, who runs an organic dairy, because when he was her high school sweetheart, he suddenly dumped her, and they had no contact for years. The suspects in Savannah’s murder seem to be the film company workers and a few of Kate’s friends who were at the shop the night before, when the crew was setting up and Kate put out the ice cream dish and spoon to be used the next day. Kate manages to broaden the range of suspects and motives, none of which she mentions to the police, as she tries to figure out who did the deed before she becomes the next victim.

Ice cream, romance, and some irresistible red herrings mark this tale of a sleuth who pushes things too far.