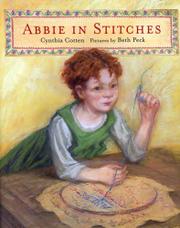 In the early 19th century in upstate New York, young Abbie despairs of ever making stitches as fine and even as her older sister Sarah’s. She would much rather be reading. Every Wednesday, Abbie goes with Sarah to Mrs. Brown, who has been teaching the girls needlework for several years. Abbie is now old enough to plan her first sampler: the alphabet, her numbers, a border. She works on it through the autumn and winter, always wishing she were reading instead. In the spring, she struggles to choose the picture and the saying that will be on her sampler. When she decides on something very important to her, her teacher and parents are at first surprised but then pleased. Her parents give her not only a needlework box like Sarah’s with her own thimble, scissors and needles, but a book of her very own. The illustrations have freely drawn impressionistic backgrounds and nicely detailed facial expressions and needlework bits. (sources, afterword) (Picture book. 5-8)