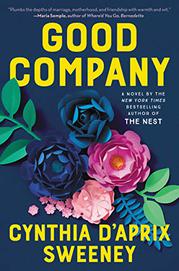 A tale of two marriages and a long-buried secret.

Thirteen years ago, when their daughter, Ruby, was 5 and they were having the happiest summer of their lives, Flora's husband, Julian, lost his wedding ring in a pond. The pond was on a property in upstate New York where Julian's theater group—Good Company—was putting on their annual outdoor play. There was a photo taken of the family sitting on the steps with their best friends, Margot and David, all leaning together, arms entwined around Ruby. Now Ruby is graduating from high school, and Flora is looking for the photograph to frame as a gift. In the process, she finds something else: the wedding ring that was supposed to be in the pond. While that unfortunate situation is unfolding in the present, flashbacks take us to the history of the friendships. Along the way, the characters' working worlds are depicted in absorbing detail: Margot is a megastar on a hospital TV series, Flora is a former Broadway singer and dancer, now a voice-over artist, David is—or was, actually—a cardiac surgeon. One of the best scenes in the book is the night David and Margot meet, over the body of a heart attack victim during Shakespeare in the Park. Always the New York maven, Sweeney nails the Central Park setting—"teenagers shrieking, the occasional smash of a bottle of beer morphing into a million glittering emeralds on the pavement"—and amusingly notes the many different versions of the story that survive over years of retelling. No one can agree how David ended up onstage or how they got to the Chinese restaurant afterward, but Margot "knew her version was—if not the most accurate—the best." All that said, this novel is far quieter than Sweeney's hit debut, The Nest (2016), and the characters are less well developed. We should know Flora best, but Margot is more clearly drawn (which would be no surprise to Flora, always second fiddle).

While a little thin, plotwise, Sweeney's second novel lives up to its title: warm, witty, and interesting.