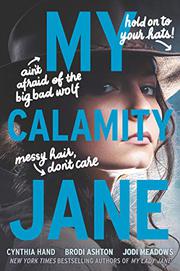 A posse of werewolf hunters disguised as a traveling troupe of sharpshooters roam the Old West in search of a particularly vicious werewolf known as the Alpha.

Under the watchful eyes of the paternal Wild Bill Hickok, protagonists Calamity Jane, Frank Butler, and Annie Oakley track the Alpha, all while navigating budding romances and family quarrels. While each teen is dedicated to the collective, they are each driven by their own motivations. Frank, for example, hopes to one day give up werewolf hunting and be a full-time entertainer. Annie—who must convince the group to hire her as a sharpshooter in the show—flees a family that wants to force her into marriage. All Jane wants is to settle down on a plot of land somewhere, far away from prying eyes. As the plot unfolds, readers learn each of the characters’ origin stories—including their deepest secrets. The book’s thrilling plot is driven by a brilliantly clever, collective narratorial voice that frequently intercedes with historical tidbits, witty asides, and political statements ranging from critiquing America’s lack of gun control laws to the shameful genocide and violent displacement of Native Americans. While most of the characters are white, the story does include two Lakota characters and a protagonist who comes out as queer. Full of twists, turns, and laugh-out-loud humor, this tongue-in-cheek feminist alternative history is impossible to put down.

A thrilling alternative history that sparkles with wit and charm.