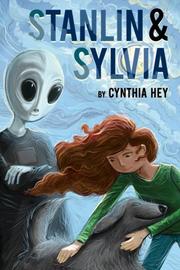 Stanlin, a friendly space alien drawn to a kindly human girl, defies his planet’s nonintervention policy and reveals himself to her when an incipient epidemic endangers all life on Earth.

Debut author Hey’s smooth, light-treading prose makes a fast read out of material that other writers could have been tempted to render as fashionably dark, even nightmarish. Though he looks like a bald, big-eyed Whitley Strieber-esque space invader, Stanlin is a student-age member of a friendly alien race from the planet Capton in the Andromeda Galaxy. They routinely visit and monitor other worlds, teleporting by thought (no flying saucers here) and then shape-shifting or remaining invisible in accordance with Capton’s strict nonintervention policy for less developed civilizations. Knowing Earth from his field trips, Stanlin is especially smitten with Sylvia, a junior high schooler. However, soon the aliens learn that a disease tied to animal influenza could effectively wipe out all terrestrial life. One potential disease-carrier is a youthful serial killer named Ned, convinced ever since a childhood brain trauma that he’s on a mission from a vengeful God to cleanse the world. (Stanlin’s people, meanwhile, respect God as a warm, nondenominational “Highest Authority.”) Stanlin reveals himself to Sylvia, using advanced technology to peer into future possibilities, and they try to thwart the coming catastrophe by initiating a grass-roots animal-welfare program. While the material may seem a bit childish to older tweens and readers who have graduated to the gothic gloom of lovesick teenage vampires, Hey’s voice remains consistently breezy, nontaxing and up-tempo—whether the matter is cute puppies or extinction-level murder. Even a subplot about a vengeful drug criminal plotting infanticide doesn’t take the cheery tone down too many notches. Stanlin and his kin (with their favorite exclamation, “Superbly super!”) are similar to past, lightweight extraterrestrials of popular fiction who interacted with Fred Flintstone or Archie and Jughead.

Skewed to the younger end of the YA-fantasy spectrum, the author’s adroit style maintains a buoyant tone even with apocalypse on the horizon.